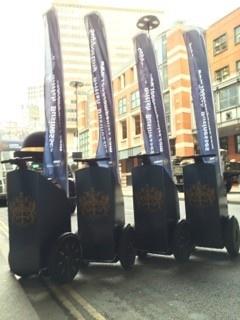 Last weekend, Segway Events were honoured to be asked to help with the Lord Mayor's Parade in London.

Over 6000 people took to the streets of the capital to participate in various ways - military marching bands, chinese acrobats, decorated floats and of course, Segways!

Segway Events were there with customised shielded Segways and large sail flags with the London Stock Exchange. The procession was over three and a half miles long, filling the whole space between Bank and Aldwych.

A crowd of around half a million people attended to spectate and millions more watched live on the BBC.

The Lord Mayor's Parade, claimed to be 'the longest, grandest, most meticulously organised procession in the world', is a London institution and one that Segway Events are proud to have been a part of.