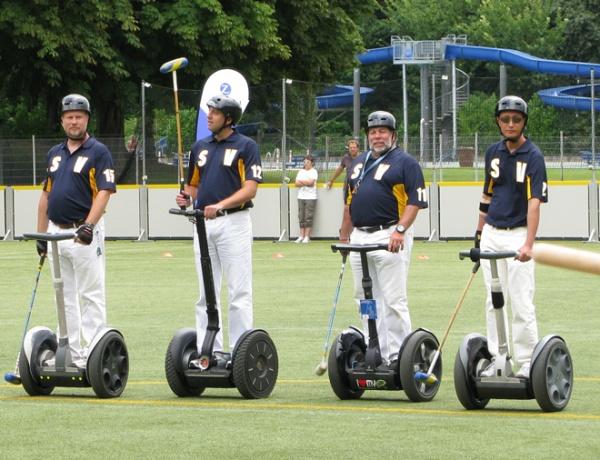 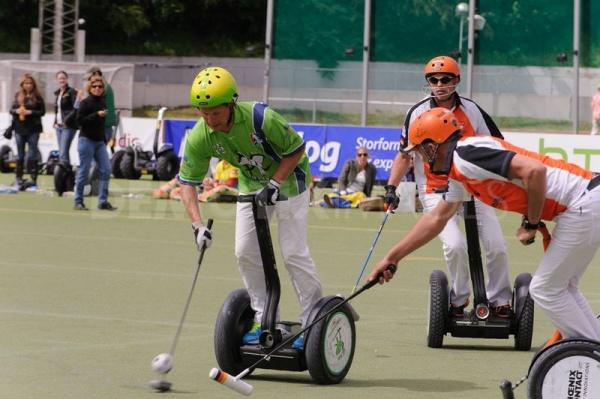 Segway Events are now offering Segway Polo Games as the ultimate coporate event. Segway polo is similar to horse polo, except that instead of playing on horseback, each player rides a Segway on the field. Its a new and exciting team sport which originated in the USA and dreamed up by Silicon Valley techies and promoted by Apple co-founder Steve Wozniak (known to many as "The Woz").

Celebrating the UK's first international Segway polo tournament which will take place in Rugby in April, Segway Events will be offering a format of Segway Polo to corporate groups either as a fun day out for staff day out or as a tournament for busineses to compete.

Play Segway Polo with your colleages, clients, or partners

A Segway Polo corpoate event incoproates numerous games surrounding the game of polo that will require team work, coordination and ambition to win, while at the same time requiring total concentration and balance.

A program will be tailored to your requirement but could look as follows.

Please don't heistate to contact us to discuss any questions you may have regarding organsing a Segway Polo corporate event.

The UK event will be held in Rugby this April and is being billed as the warm-up tournament for the sport's biggest event, the Woz Challenge Cup, which is named after Apple cofounder and Segway polo player Steve Wozniak. In preperation for the event BBC breakfasts Mike Bushell had a go during a visit to Rugby College, the film will be shown on BBC Breakfast this Saturday and was picked up by local media

The Segway Polo world championship or Woz Challenge Cup, was established in 2006 when the Silicon Valley Aftershocks played the New Zealand Pole Blacks in Auckland, New Zealand. The result was a 2–2 tie. The Woz Challenge Cup is named after Steve "Woz" Wozniak, co-founder of Apple, Segway PT enthusiast, and fearless polo playing member of the Aftershocks. Steve Wozniak On Segway Polo