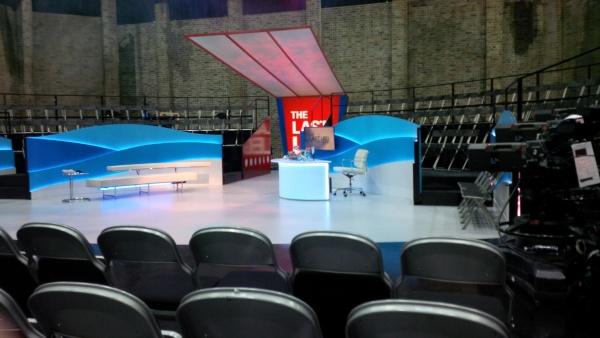 Segway Events were thrilled to be asked to be involved on the filming of Channel 4’s hit topical comedy show ‘The Last Leg’.

Arriving at the London studios, we were greeted by a member of production and introduced to the floor manager. With quite a buzz that the Segways were on site, a dry run took place to ensure that everyone was familiar with the running order of the show.

The Last Leg, presented by Adam Hills and co-hosts Josh Widdicombe amd Alex Brooker, provides offbeat commentary on the significant news stories of the previous seven days. This particular episode was a round up of the previous year.

As the audience took to their seats, we gave the celebrity guest, Richard Ayoade a briefing. Having ridden a Segway before (albeit a slightly smaller model) he took to it like a pro and was clearly confident in manouvering the machine.

Once the show was live, we were waiting with the Segway behind the audience seating, ready to hand it to Richard to make his entrance. He then rode into set, high fiving Adam on his way in, before taking his seat for the rest of the show.

Until the finale, when the Segway would be needed again, we sat behind the camera watching the show until we were called back into action. Richard collected the Segway from us to ride back onto set and take part in the end of show song with the three presenters.

Segway Events would like to thank everyone who worked on ‘The Last Leg’ for their hospitality. Our Event Manger Susan Fairchild said of the day, ‘Everyone was lovely from the crew and production to the presenters and the guest!’

The Last Leg airs on Channel 4 every Friday at 10pm.

Do you fancy taking on the challenge of mastering a Segway? CLICK HERE for our event dates.